In addition to completing your letters of introduction and in order to prepare your students for the measurements that will take place later in the month, you might start off by making them more aware of shadows and the "stories they tell."

Have your students look at a shadow like the one below: 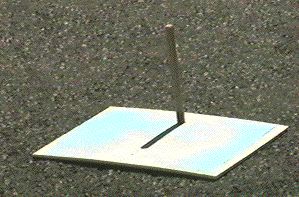 Have them describe what a shadow does over the course of a day (from sunrise to sunset). Make a graph to tell the shadow's story.

See Making a Shadow Plot in the Northern Hemisphere for details.

Interesting sidebar: One of the myths that James Loewen debunked in his book "Lies my Teacher Told Me - Everything Your American History Textbook got Wrong" (p. 45-48) is that most people at the time of Columbus' voyages thought the earth was flat. Columbus was not so daring, nor did his crew want to mutiny because they feared they would drop off the edge of the earth. The truth is that most people around 1492 believed the earth was round. Historians give credit to Washington Irving's biography of Columbus in 1828 for starting the myth. He had an account of how Columbus had to convince his investors of the spherical nature of the earth. Pure fiction.

Introducing the project to your students

Imagine that you are living over 2000 years ago and you are convinced that the earth is round. How would you go about measuring it? One way would be to start walking in one direction and keep track of how far you go. If the earth is round as you believe, eventually you should return to where you started. Do you think anyone actually contemplated trying this back then? Why or why not? What would be some of the obstacles?

Another method would be to drill a hole to the "other side" of the earth and measure the distance. Once you knew that distance, could you determine how round the earth is? Is there a relationship between the distance around a circle (circumference) and the distance through the center of the circle (diameter)? (You might try one of the activities at http://arcytech.org/java/pi/ to see if you can discover a relationship between the circumference of a circle and its diameter.*) Unfortunately, digging a hole through the center of the earth is just as out of the question as circumnavigating the globe by foot.

This brings me to someone named Eratosthenes who was born 2000 years ago in Cyrene, a town in northern Africa. He actually found out how round the earth is by doing an experiment. His idea was to think of the earth as an orange cut in half. The cross section is divided into wedges just like pizza slices.

If you can measure the sun's angles at two different positions on the earth at the same time, you can figure out the central angle (Angle ABC below). Then you need the distance along the surface from A to C. This gives you the dimension of one slice of the cross section of the Earth. How big is the whole circumference? 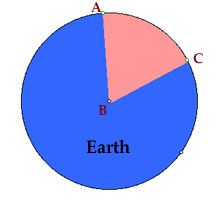 Let's look at an example to see how this information leads to determining an empirical value for the circumference of the earth.Our two sites will be at Manasquan, New Jersey and San Juan, Puerto Rico. At local noon on the same day, the experimenters measured the shadow cast by a meter stick. In Manasquan, the shadow length equaled 80.5 cm. In San Juan the shadow length was 35.3.

The next step is to figure out the sun angles at Manasquan and Puerto Rico. A simple method you can use is to create a scale model of your triangles and then directly measure the angle. In this case we could create a triangle for Puerto Rico with sides that are 3.53 cm and 10.0 cm. We could also use 3.53 inches and 10.0 inches. As long as the proportions are the same the angle should be the same. A protractor can be used to measure the angle. 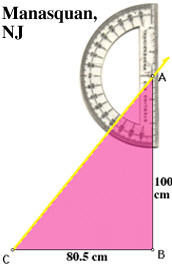 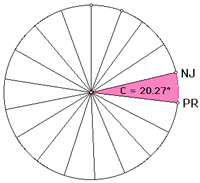 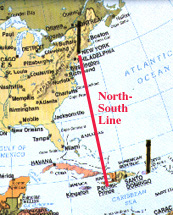 Now that we know the central angle, we can determine how many such angles would make up the full circle. That is, how many "slices" can we make where the angle is 20.26 degrees? Since the total is 360 degrees, then you would have a little less than 18 equal "slices" (or 17.77 to be more precise.) Next, each slice's edge represents the distance between Manasquan and Puerto Rico, or more accurately, the North-South distance between the two sites. 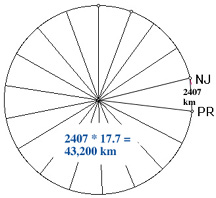