The students in sections 1, 2, 3, 7 and 8 in the 8th grade at Karcher Middle School in Burlington, WI all made similar conclusions. The students first reviewed their hypotheses and then studied the data presented by all of the other classes. Each group of students either graphed the data for volume vs. boiling point, elevation vs. boiling point or room temperature vs. boiling point. Groups of students shared their graphs with each other and all of the groups came to the same conclusion, that elevation has an effect on the boiling point temperature. The students came to this conclusion by finding the graph in which the data points fit along the trend line created by the Microsoft Excel program. A discussion then followed to determine why this was the case. The students decided that a change in air pressure would cause the change in boiling point temperature at various elevations. The students talked about possible sources of error in the experiment and why some of the data points for the elevation graph may be far from the trend line. One idea was that not all classes may have used distilled water. Also, careless thermometer readings were mentioned. Finally, the determination of the boiling point may have varied from when the water first started to bubble to when the water was rapidly boiling for several minutes. The students at Karcher Middle School enjoyed being a part of a project that involved students their age from around the world.

We used the general database of the participating schools, to draw those 4 graphics:
Database (html) or Database (pdf) 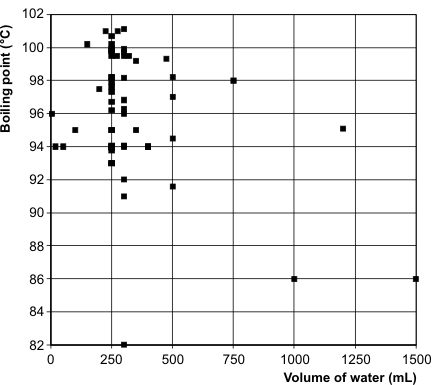 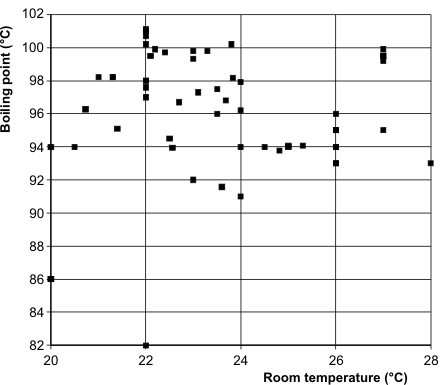 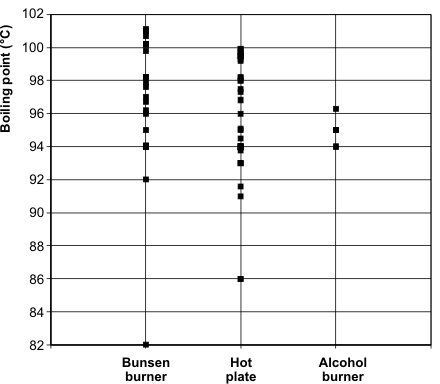 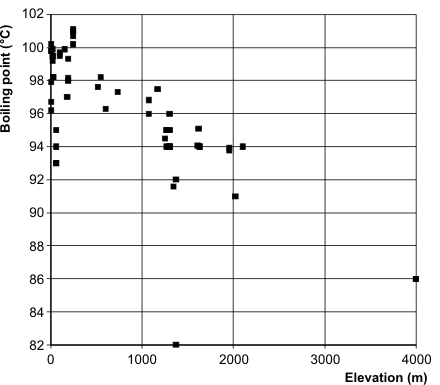 It was diffcult to find a correlation in those 4 graphs.
The graph boiling point (y-axis) vs. elevation (x-axis) from data of previous runs of the project was helpfull 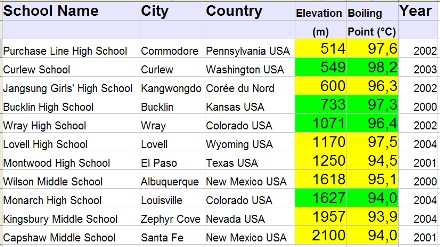 So we calculated average data for each school of the 2008 project and we found a similar correlation between boiling point & elevation. 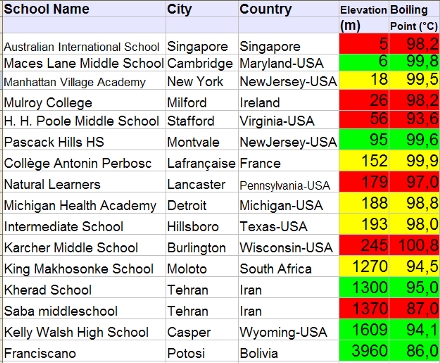 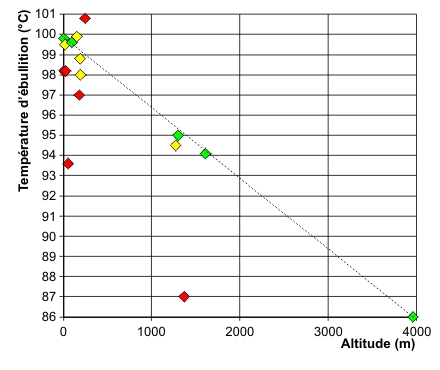 Our website of the project, with tables, graphs, photographies, google map and video.

Kherad Middle School's students
While doing boiling project as we expected, The classes average(grade 6) for water's b.p was around 96. After graphing the data from all participating schools, we found that our data was very close to the line of the boiling point graph vs elevation.
Also we compared data of classes that was different in volume of water, but there wasn't marked difference.
Conclusion:
elevation is the most parameters in measuring boiling point.

During the Boiling Point Experiment we learned that water doesnt always boil at the advertised temperature of 100 degrees Celsius. Our school had temperatures recorded at 94, 95, and three 93 degrees Celsius class averages. We noticed that temperatures ranged from 82 degrees Celsius at 1370 meters in Iran to 101 degrees Celsius in Wisconsin (U.S.). Schools at higher altitudes tended to have lower boiling points. The school in Bolivia, with an elevation of 4000 meters had a boiling point that was consistently low at 86 Celsius degrees in both trials. When we did our graphs using the Spring 2008 data and data from the previous run, we noted that elevation seemed to affect the boiling point of water more than any other variable. The volume of the water and the room temperature did not seem to have an effect on the boiling point. Interestingly enough, all of the 100 degree readings were obtained by schools that used Bunsen Burners as the experiment heating device, so there is a correlation between type of heating device used and the boiling point temperature. The conclusion that we reached is that the elevation of the school has the strongest correlation to the boiling point of water. If we did this experiment again we'd like to try to standardize the amount of water used, i.e. everyone uses 250 milliliters, and the type of heat source, i.e. everyone uses hot plates by a certain manufacturer. We would also like to standardize the thermometers used, i.e. specific brands, digital or not, etc We enjoyed the experiment and thank you for giving us this opportunity!

After the perform a linear regression, we obtained the following equation:

We are all in grade eleven (Chemistry). The first thing that surprised us was the fact that elevation is the influencing factor for the BP of water. That the higher the elevation the lower the BP. We saw this when we started analyzing data as it came in form other schools and after we had our graph drawn.

Secondly, we also realized that some of our schools with a higher elevation than our own had some data that was inconsistent.

However, with our own results as five different classes, we had a small difference in our BP and we think of attributing that to inaccuracy. We are now very proud of ourselves because we know why water boils at a certain temperature at a particular height (where pressures are different).

If we were to do it again we surely would pay attention to accuracy.
Thank you
Yours in the name of IBPProject

Our hypothesis that the boiling point would change as the elevation changed was supported by the data. We sorted the data in the spreadsheet by volume, elevation, room temperature and type of heat source. We compared the data in the columns we had sorted to identify patterns. We also used scatterplots to show a trend of how the temperature changed with each. The only graph and information we sorted that showed a trend was the one with elevation. The boiling point went down as the elevation went up.

We learned to calibrate a thermometer, read the scales on the thermometer, sort data in a table, make a scatterplot, and put our math skills to work analyzing real world data. The collaboration with students all over the world made this a very special project.

Our boiling point was lower than we expected since we are at 193 m above sea level. The average was 98 degrees. We had a cold front moving through and so we were in a low pressure area with our weather on the days we did the experiment. Our temperatures went down a half degree a day as the front moved through. We wondered if this affected our temperature and plan to ask on expert from the links on your site.

After a group discussion, we came to the conclusion that the reason for this was due to a change in air pressure at different heights above sea level. We also noticed that a few of our measurements were not consistent, possible causes of these errors could be inaccuracy when reading thermometers, not calibrating thermometers properly and changes in our weather.

If we were to do this project again, we think everyone should use the same volume of distilled water all the time and maybe the heating source should also be standardised across all schools.

Our teacher Ms.McKelvey has learnt to say 'the boiling point of water
at sea level is 100 degrees celsius!!

as a result of doing this project!!

Thank You very much, we hope to join more of your projects in the near future.

Hello friends:
We measured water boiling point in two classes (202 & 201). We are in grade 7 and every one are 22 students. We did this project in 14 groups including 3 students.

Students of class 201: We believe boiling point isn't related to kind of heating device or average room temperature. We think it is only based on the elevation. If all of schools did their experiments in the same conditions (volume of water, kind of container and) we could draw the perfect graph. But now it is impossible.

Students of class 202: We did this project too. But we did it by covered container with aluminum foil. When compared our results with other class in our school, we concluded that the shape of container and covering it is important. So conclude two factors might affect boiling point:

a) Shape and kind of dishes
b) Elevation