Marine Academy of Science and Technology

After much discussion we decided that type of heating device and the amount of water has nothing to do with boiling point. The major factor is the elevation of the site. We had a great time doing this project and plan on trying it again next year.

Each group wrote their hypothesis and each variable was chosen as a possible cause. We had a class discussion and each supported out hypothesis.

After making graphs and tables, we concluded the fact that showed the strongest correlation to the boiling point was the elevation. More pressure means that the water vapor has to push harder on the air above it and less pressure means that there is less air to push out of the way. Because when we increase our altitude we generally find an accompanying decrease in atmospheric pressure, changing altitude can change a boiling point.

One of our groups hypothesized the correct answer. When looking at the other data from other schools we wondered if we had done something wrong that influenced our data. The calibration of thermometers and correct elevation might have caused significant differences in the results.

Other variables we would like to add are the barometric pressure and the humidity.

Thanks for the experience,

Which influences the boiling point of water?

When our class was first asked this question, we each made our own hypothesis

After collecting and organizing the data from the participants in the experiment, our class saw the highest correlation with the room temperature and boiling point and the volume of water and the boiling point.

After doing research, we realized that the strongest correlation should have been between the boiling point and the elevation. We are not exactly sure what happened to our graphs. Something definitely influenced our results. We think our mistakes were caused by human error. We made our graphs ourselves and although our teacher carefully watched us, there could have been many mistakes.

Thank you so much for the experience. We really enjoyed doing the experiments and working on the computer.

Marie Katzenbach School for the Deaf

Hello! We had individual hypotheses. One of us chose room temperature, one chose volume of water, nine chose elevation, and five chose heat source. After examining the graphed data, we concluded that elevation had the most influence on boiling point.

We had fun doing the actual experiment (that was the best part) and we learned a lot about analyzing graphs!

After watching the available data we have agreed that the most relevant factor in relation with the boiling point is the elevation of the place. The other factors, we believe, have no significant influence in the boiling point at all.

Our original hypotheses, that there would be a difference in boiling point depending on room temperature and volume of water, weren't verified but we found a correlation between the elevation of the school and the average boiling point of water according to our scatter graphs. We discovered that the higher the elevation, the lower the boiling point usually is. We talked about why this happens and how we have to put energy into the water until the vapor pressure raises enough to be the same as the air pressure. Usually the air pressure is lower the higher you go, so less heat energy has to go to the water before it can boil. We found a web site that calculates the expected boiling point based on barometric pressure. We got extra team points for bringing in food labels that have special directions for cooking at higher altitudes. When we do this project again we will check our boiling point data with the predicted temperature from that web site. We also used the latitude and longitude of each school to plot it on the world map. We thought the whole project was fun. We also got a lot of attention around school since our pictures, graphs and charts, and the boiling point data were posted on the main bulletin board. Thanks! We learned a lot (calibration, conversion, measuring carefully,reading real graphs we made,and patience)and had a good time.

We really enjoyed doing this project and I think the main reason for this was the surprise the students got when they realized that the volume of water, the heating device, and the room temperature had nothing to do with the temperature that water boils at. It was great to see the students realize that elevation was the key factor in boiling point, after plotting and looking at their graphs. Thank you for a great project. I will definitely do this with my new 8th grade class next Fall.

After looking at and discussing the data, our classes determined that elevation had the greatest influence on boiling point. Although we started with many different hypotheses, and we could make a connection to volume of water, room temperature and heating devices, the strongest connection seemed to be between elevation and BP.

Because my students are so young, I edited the elevation data for them. They were able to understand the idea of "line of best fit" and to see the correlation. Then I asked them to plot our data - there were cries of dismay as they realized where we would fall on the graph. It led to a great discussion of why scientists replicate experiments. Their hypothesis was that our water was too cold. Sounds like we need more experiments!

We are the 9th graders from Kfar Shmaryahu Rishpon School in Israel. The purpose of our project was to find the boiling point of water. Our hypothesis in the beginning of the project were:

Many variables could have effect on the boiling point of water:

After we conducted the experiment we analyzed it:

Here we have pictures from the experiment process:

After we analyzed the data and graphed the results from different schools around the world we discovered: elevation was the factor that effect on the boiling point of water. 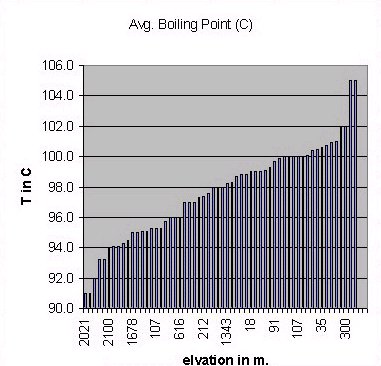 The graph shows that:

higher the elevation, the lower the boiling point of water.

We had a great time working on this project
Ruty Chotzen and the 9th greders!

Bruce Street School for the Deaf

None of the other factors - heating device, volume of water, or room temperature caused the boiling temperature to change. There was no relationship of the boiling point to these things.

After all the graphs were done we think Elevation is the main factor that changed the boiling point. The lower the elevation the higher the boiling point. The higher the elevation the less air pressure. The water volume is not a factor because no matter how much water there is, the water will boil at a certain temperature. The room temperature is not a factor because it's an ineffective variable. No matter how hot it is the water will always boil at the same point. No matter what heating element you use the boiling point will not change. It is still heat.

My hypothesis was that the volume of water would effect the boiling point. We spent a lot of time graphing and analyzing our data. This was a lot of work, but we learned a lot about making graphs and analyzing them. Finally, we decided that it was the elevation that effected the boiling point. Out of all the experiments we did this year, this one was my favorite! I had a lot of fun.

Our class decided to analyze the data in small groups looking at one factor at a time. We learned how to pick out patterns, similarities and inconsistencies within the data. We noticed right away that we would need to group the data so that the variable being tested was the only one that was different. For example, when looking at heating device, we felt like we could only compare the hot plates to the bunsen burners when all of the other factors(volume, altitude, room temperature) were kept the same. This created a lot of discussion among the students about the validity of the experiment. Nevertheless, volume, heating device, and room temperature seemed to show no consistent affect on boiling point. Altitude showed a definite affect on boiling point although some data was once again inconsistent with this finding.

From this project students learned about the importance of experimental design and techniques. They learned how to thoroughly analyze data and graph the data to show trends. From that they learned how temperature stays the same during a phase change.

We can conclude from our data, and other groups throughout the world, that the boiling point of water is strongly influenced by the elevation. Analysis of data such as types of heating devices, volume of water, and room temperature showed no pattern or strong correlation. When boiling point was graphed against elevation, it showed an indirect relationship: the higher the elevation, the lower the boiling point. The only places that reported the classic textbook definition of the boiling point of water as 100 degrees Celsius clustered around sea level. When we re searched information about the boiling point of water, our sources stated that boiling points change because of atmospheric pressure. Higher altitudes have thinner atmospheres, lower external pressures, and lower boiling points and vice versa. A suggestion for future runs of this project might be to include a measurement of the atmospheric pressure, if possible. We learned a lot from this experiment. Most of us did not realize how much of a role elevation plays in something as simple as boiling water. It was surprising to find that water does not always boil at 100 degrees Celsius, something we have heard all of our lives. Our classes found it challenging and interesting to apply lab, graphing, and teamwork skills to real data. It was very different than the cleaned up data we get in textbook problems and we felt that people around the world depended on us to do a good job on this project.